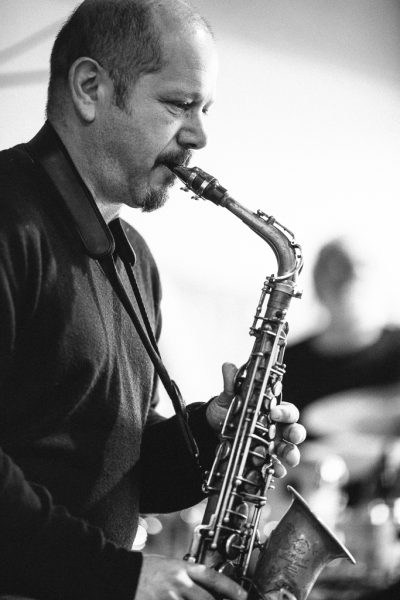 Born February 14, 1969 in Rome, Stefano Di Battista initiated himself into music during childhood, in a neighborhood orchestra composed mainly of brass. Having started the saxophone at the age of thirteen, he came to jazz through the records of Art Pepper and Cannonball Adderley, two musicians who will remain lasting influences. He then follows an academic training before starting to “do the job” in pop music. His first meeting with Massimo Urbani (1957-1993), an Italian alto saxophonist admirative of Charlie Parker’s style, also plays a decisive role in his ambition to become a jazz musician. However, it takes a combination of circumstances so that the talent of the young Roman saxophonist can burst into the open.

Encouraged to go to Paris by the pianist Jean-Pierre Como who heard him during the summer of 1992 at the Festival of Calvi, Stefano Di Battista quickly makes his way among several musicians of the French capital, who help him getting started, notably drummer Aldo Romano (Stefano is a guest on two albums) and conductor Laurent Cugny, who invites Stefano and his fellow trumpeter Flavio Boltro to join the Orchestre National de Jazz he established in 1994. Even if he is mainly active in France, he maintains close links with the Italian jazz community, recording with his compatriots Enrico Rava (1996), Rita Marcotulli (1998), Daniele Scannapieco (2003) and Dario Rosciglione ( 2004).

His third album on Blue Note, Round About Roma (2002), is therefore recorded with a transalpin quartet (Eric Legnini, André Ceccarelli, Rosario Bonaccorso), featuring a symphonic orchestra arranged and conducted by Vince Mendoza. Stefano then releases two more albums on Blue Note, a tribute to Charlie Parker, and the virtuosic Trouble Shootin’ (2007), featuring Fabrizio Bosso on trumpet and Baptiste Trotignon on the Hammond.
A couple of years later, he records his album Woman’s Land (2011) on the Italian label Alice Records, taking as an inspiration several female historic figures of the 20th century. At the same time, he starts a long-lasting collaboration with Italian singer Nicky Nicolai, accompanying her on her own projects.
A much requested sideman, Stefano di Battista is often invited to play with his French and Italian colleagues, on stage and in the studio. His ability to engage a musical conversation with other artists can be found on his later albums. Giù la Testa (2014) is recorded with French guitarist Sylvain Luc, who is as proficient as Stefano in mastering the melody. He then features again Nicky Nicolai on an original project with writer Erri De Luca, La Musica Insieme, at the boundary between Neapolitan literature and musical performance.
For 2021, Stefano Di Battista is working on a new album : a tribute to the late composer Ennio Morricone, with whom he had the chance to work. This new project features André Ceccarelli on drums, Fred Nardin on the piano and Daniele Sorrentino on bass.